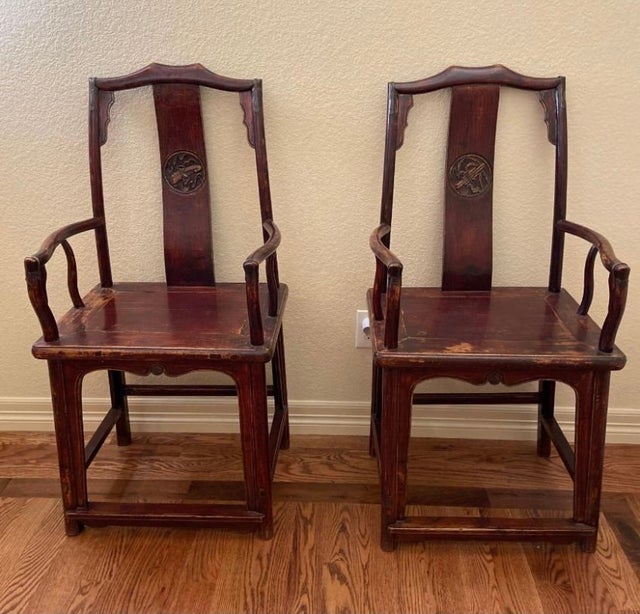 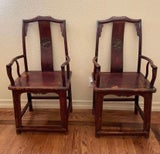 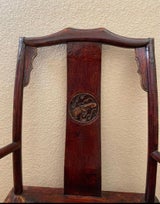 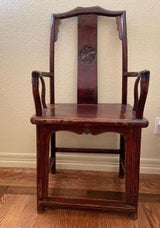 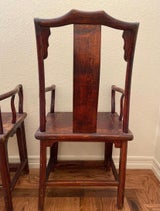 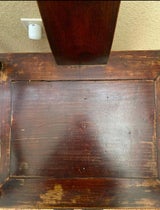 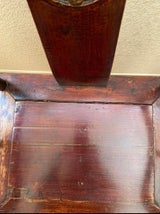 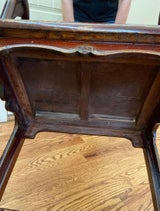 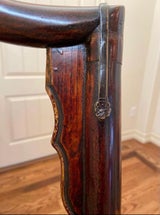 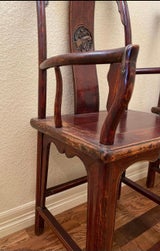 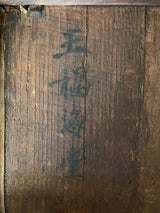 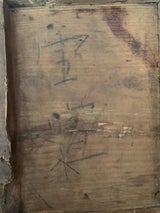 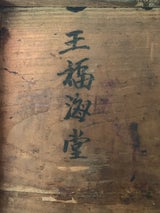 ntique Shanxi Northern Official Elm Hat Chairs with Yoke Back, circa 1820s. These chairs come with over 200 years of history from Shanxi, China.  Chairs such as these were the most famous created during the Ming & Qing Dynasties.  Its name is indicative of its features: High Yoke-Back, represented in the curved center splat which was a backrest hugging the natural curvature of the spine allowing for both comfort and aesthetic beauty. Another characteristic of its name, Official’s Hat, for its curved head rails that mimics the brimmed hats of government officials, as well as the unique Four Stretchers, the leg supports that run horizontal between each leg.  Each one is positioned at different heights. The term for this was bubugao, which means ‘step higher.’ It was both a structural and symbolic device representative of official promotions. The chairs also feature brass decorative strappings on the arm rails and on each back support rails.  A striking carved crest adorns the center splat. This set of chairs are remarkably gorgeous in design and craftsmanship!  To the best of our knowledge, these chairs are crafted of Elm Wood, a traditional hard wood from the rosewood family, of this northern province of China.  They possess a nice original patina; hence, why we chose not to re-stain in order to keep their original luster.  These chairs are very solid in construction, there was no need for re-glueing or restructuring.  This says a lot in their original build of 200 years ago.  It was discovered on the underside of the chairs were Chinese characters.  A translator conveyed that the darker ink characters represent the maker of the chairs or their owner.  The first character is someone’s last name, the two following represent the first name, and the last character is the family or someone’s home.   Commonly, the last name is used as the family business name.  The first character (lighter ink) means treasure or precious. The translator was not completely positive on the last character but thought it said “guest.”  A reproduction of this style of chair sells for $900, while authentic chairs can go for several thousand dollars.  We are offering quite a bargain!  These beautifully designed Hat Yoke armchairs are suitable as stand-alone pieces to showcase their beauty as a main focal point or to be seated at a table.